When shaping a bonsai tree, the first step is to decide which style is best suited to the tree's natural design. While there are complex arrays of shapes and styles from which to choose, bonsai is usually classified into five basic styles.

These classifications are based on the overall shape of the tree and the degree to which the trunk slants away from an imaginary vertical axis. There are two additional styles (Windswept and Literati) that are sometimes viewed as basic styles.

Before potting a bonsai tree, consider how it will stand in the container. Take a moment to envision placement before taking action. This helps avoid the all too common situation where a tree is planted one way and then uprooted to make a change.

Keep your overall theme in mind when planting bonsai. Upright trees should have a stabilized look in the container; slanted and cascaded styles often have their upper root surfaces exposed to imitate the way plants grow in nature.

No matter what style you choose – whether single trunk specimens or groups of trees from single roots – everything depends on your selection of plant material and your ability to visualize the bonsai's final form.

The formal upright style has classic proportions and is the basis of all bonsai. It is the easiest for a beginner to develop because:

In this style, the form is conical or sometimes rounded, and the tree has an erect leader and horizontal branches. Typically, one of the branches is lower and extends a little farther from the trunk than the others. Also, the lowest two branches are trained to come forward on the front side of the tree, one slightly higher than the other. The third branch of this style extends out in the back of the tree at a level between the two side branches to give the plant depth.

When selecting a nursery plant for this style, look for a tree with a trunk that rises from the ground in a fairly straight line. The trunk should be single, without forks. A balanced distribution of branches is also important. The first branch should be the most developed and positioned at roughly a third of the way up the tree's trunk.

Initially, shape by trimming off the small branches or twigs that are too close to the base and near the main stem. These branches detract from the overall composition. The goal is to develop a sense of balance, but not strict symmetry.

This style is best suited to conifers. Fruiting or naturally informal trees are not suitable for formal upright.

Recommended Containers: Plants in the formal upright style look best in oval or rectangular containers. For pleasing proportions, avoid centering the tree in the container. Instead, place it about a third of the distance from one end.

Recommended Species: Larches, Junipers, Pines and Spruces are all suitable species for formal upright bonsai. Maples may also be used, but are not as easy to train into such a conformist style. 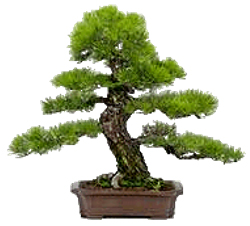 The Informal upright is a frequently seen style, a basic design that it follows the natural structure of the tree's trunk. The goal is to develop a single line of the trunk, reaching from the roots to the apex while producing a natural branch and foliage structure.

If the view from above is not attractive, you may move the rootball to slant the tree in another direction. Simply repot the tree, tilting the plant in its new setting. When you do this, take a moment to evaluate the tree. Consider if the branches and foliage need to be trimmed to scale to the size of the tree.

As with the formal upright style, the branching starts about a third of the way up. Look for a tree with few, if any, empty spaces.

Recommended Containers: The informal upright style looks best in an oval or rectangular container. Place the tree a third of the distance from one end, not in the center of the container.

Recommended Species: Most species of plants are suitable for this style, mainly the Japanese Maple (Acer palmatum), Trident Maple (Acer buergerianum), Beech, practically all Conifers and other ornamental trees such as the Crab Apple, Cotoneaster and Pomegranate.

Slanting trees in nature are called "leaners" - trees that have been forced by the wind and gravity into non-vertical growth. Slanted style trees often provide a powerful impression of strength and age. 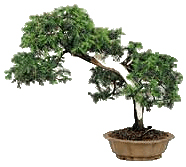 In the slanting bonsai style, the trunk has a more acute angle than in the previous styles. The top of the tree is bent slightly toward the front.

The lowest branch should spread in the direction opposite that in which the tree slants. Lower branches are arranged in groups of three, starting about one-third the way up the trunk.

The attitude of the slanting style falls between the upright and cascade styles. The goal of Shakan is to balance the movement of the trunk with the placement of the branches so the tree avoids appearing lopsided.

Recommended Containers: This style looks best planted in the center of a round or square container.

Recommended Species: Most species are suitable for this style, as the style does bear similarity to informal upright. Conifers work particularly well.

The cascade style of bonsai represents a natural tree growing down the face of an embankment.

In this bonsai style the trunk starts by growing upward from the soil, then turns downward abruptly, and reaches a point below the bottom edge of the container. For this reason, the container should be placed on the edge of the table or on a small stand.

The cascade style has most of its foliage below the soil surface.

Training a tree in the cascade style takes longer than in the slanting style. Best results come from choosing a low-growing species instead of forcing a tree that normally grows upright into an unnatural form. Bend the whole tree forward so one back branch is vertical and the side branches fall naturally. The tree should be planted off-center from the cascading side.

Recommended Containers: A cascaded planting usually looks best in a round or hexagonal container that is higher than it is wide.

Recommended Species: Virtually all the species that lend themselves to bonsai are suitable for cascade styles. Most broad leaf evergreens like the ficus pictured above and virtually all deciduous varieties will make handsome cascades. Conifers are also frequently styled as cascades.

The cascading branches are thought of as the front of the tree, and the back branches are trained closer to the trunk than in the other styles.

Branches and foliage in the semi-cascade should not reach below the bottom of the container, but should go below the level of the soil surface.

Recommended Containers: Most semi-cascade pots are slightly deeper than their length and width.  The best shapes are round, square and hexagonal.

Recommended Species: Plants that are well adapted to the cascade and semi-cascade styles are prostrate junipers, and flowering plants such as chrysanthemums, wisteria, willows, and star jasmine. 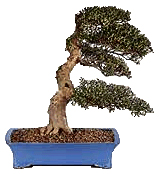 This style simulates the effect of sustained exposure to strong winds. In this design, each of the branches appears to be "swept" to one side, as if being blown by a strong wind or having large portions of foliage and branches stripped by environmental conditions.

These trees are modelled after trees found in coastal and mountain areas where strong natural forces have shaped and sculpted them for years.

Create an account with us and you'll be able to:

Fill in your email below to request a new password. An email will be sent to the address below containing a link to verify your email address.